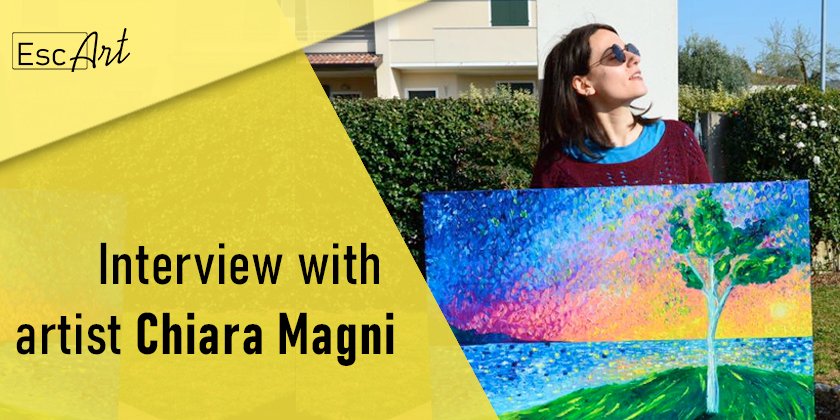 At EscapeArt Magazine we were grateful to be joined by artist Chiara Magni for our first podcast episode (coming soon) where we explored her story making her passion for art into her full-time occupation. The self-realisation she experienced proved to be an important foundation for any artist with a similar ambition.

A native of Italy, Chiara resides near Lake Garda, a vast body of water bordered by mountains and the town of Sirmione. This idyllic location proves to be a spectacle of nature and its vibrancy is heavily reflected in Chiaras’ paintings, which accentuate natures’ beauty in a striking manner.

The paintings burst with life thanks to Chiara’s unwavering pursuit of experimentation, with methods such as clashing warm and colder tones together which establish an intimate feeling in each piece of work, as well as her interesting use of finger painting. In addition, she manages to embolden each painting with texture which unites the estranged dimensions of the artists’ inner concept and its form is seamlessly translated into reality. The result is the paintings’ imagery and message being delivered in an astonishing fashion that shares some traits with Van Goughs’ impressionistic style. Her goal is to simply provide a service to a viewer, “to make them happier for a moment, even if it’s just for a second.” This claim goes understated as the finished results of her paintings are rich with explosions of colour that is burning with emotion.

The urge to paint and draw is a calling Chiara had followed since her childhood with her passion for creation being almost instinctual. In the interview, she states that this yearning to paint was “As natural as walking”. At 14, Italian painter Chiara Magni started art school intent on realising her creative potential, but her ambition was crippled when she was told by her teachers that “(she) had no talent whatsoever”.

“I’ve been dishonest with myself for twenty years, I’m not going to do this anymore.”

This revelation was important as she chose to prioritise her needs over the criticism of others and ambiguous nature of success.

Once this self-acceptance was affirmed, she was able to experience a natural progression to selling her art online: She set up a Facebook page and Instagram account, posting her paintings in varying stages of completion which helped to attract more attention and eventually gain enough popularity to sell her pieces across the globe to admirers as far as New York City.

So, what does Chiara Magni’s story teach us?

This is a shining example of how acknowledging yourself is the first and most critical step towards pursuing a career in art.  The path to success is difficult and shrouded by unknown outcomes and obstacles which feeds into self-doubt about one’s ability and their chances of success. This is a fact of life that is universally understood, yet Chiara Magni shows that despite the fear that discouraged her from pursuing her goals, she decided to put her own happiness first.

Many people have high expectations for themselves but these perceptions of the future end up clouding your belief in your own success, it is, therefore, most important to know yourself and your values. Once you resolve your inner conflicts and allow yourself to pursue your goals,  then you will always have the means to guide you when facing doubt.

Shirko Abid is a walking cultural database with a deep passion for the film and music industries.